That attack last month on the Libyan consulate and the terrible murder of U.S. Ambassador Christopher Stevens? The riots and demonstrations against the anti-Islam video “The Innocence of Muslims?” It’s exactly what the higher-ups at Random House feared would happen over THE JEWEL OF MEDINA. It’s why they backed out of publishing it.

“Riots in the streets,” I heard from an associate publisher. And: “We have consider the safety of our employees. And what about our troops?”

She was explaining the decision, two and one-half months before the Aug. 12, 2008 launch date, to “indefinitely postpone” publication of the book and, therefore, its sequel, THE SWORD OF MEDINA, which I had already submitted to my editor.

What happened to spook this elephant among publishers, the world’s biggest producer of books in the English language? The squeak of a single mouse — the University of Texas’s Denise Spellberg, an Islamic history professor whose academic writings had centered mainly around A’isha bint Abi Bakr, the Prophet Muhammad’s young wife and the protagonist of my books.

Random House had sent a copy of my book to her after I’d given them names of experts in Islamic history whose works I’d read as research for my novel. They were so impressed with the historical detail in JEWEL that they thought historians would be, too. Unfortunately, not all historians appreciate the fictional aspect of historical fiction. Dr. Spellberg was one of these.

A “very ugly, stupid piece of work,” she is quoted as saying in “You Still Can’t Write About Muhammad,” the Wall Street Journal’s editorial about the Random House decision. According to an email that made the rounds at the publishing company (of which I obtained a copy), she called my book “more dangerous than the Satanic Verses or the Danish cartoons” and told her own editor at Knopf that my book amounted to a “declaration of war.”

Who wouldn’t be spooked? To be fair, the company’s execs didn’t rely only on Dr. Spellberg’s opinions. They also sent advance reading copies of JEWEL to three New York academics, asking whether they thought it might incite violence. I never saw their replies, but I was told that two had said my book would very likely cause a “heated response.” None of them agreed with Spellberg that sexuality would be an issue, and none of them agreed with the others as to what, specifically, extremist Muslims might find so offensive.

Some who heard my tale were quite offended at Random House’s decision, calling it “cowardly.” A Swedish journalist sneered that, if the company was afraid to publish controversial books, it ought to sell ice cream, instead.

Others were snide about Dr. Spellberg’s over-the-top reaction (I felt sad when I read that she, too, had received death threats.) One reporter asked me point blank, “Do you think Denise Spellberg is a bitch?” My response: I don’t know her.

I never did say anything negative about Random House or Dr. Spellberg because, even though I disagreed with them, I understood their fears. (Some have suggested professional jealousy was the reason behind Dr. Spellberg’s “frantic” phone calls. I choose to think she acted sincerely.) When three men slipped a Molotov Cocktail through the letter slot of my British publisher’s home office in the wee hours, starting a fire, reporters said to me, “This is just what Random House was afraid of, isn’t it?”

I suppose it was. I can only imagine what kinds of wounds New Yorkers suffered on Sept. 11, 2001 — the shock of those attacks happening so nearby, the loss of family members and friends, the gaping hole that remained for years on the site of the World Trade Center towers and in the psyches of those so close to the tragedy. One Random House executive had a young son attending school directly across from the towers when the planes hit, the ex-wife of one of their authors told me.

When I heard of the attacks and riots over, ostensibly, the video “The Innocence of Muslims,” my first reaction was protective. It’s not about the video, I said. It’s just an excuse to rile people up against America. We are so big that we make an easy target. As it turns out, it’s messier than that: the U.S. government now says the attack on the consulate in Benghazi, on 9/11, wasn’t about the video at all, but had been planned in advance. Other demonstrations, however, did protest the video, which, as with my books, has probably never been seen by most of those who rallied to decry it.

Now THE JEWEL OF MEDINA  and THE SWORD OF MEDINA are published in the U.S., by Beaufort Books, and translated into 19 languages. None except Martin Rynja, the publisher at Gibson Square Books, has suffered any attacks; my Serbian publisher, Aleksandar Jasic at Beobook, did get some threats. There was also a demonstration in Bangladesh by a bunch of angry-looking men, and a rambling call for my assassination published online by someone with an unpronounceable name. I got some threats online, too, and was especially frightened after someone commented, “Kill the bitch! Let’s do to her what we did to Theo Van Gogh,” on an interview with me posted on You Tube.

Unlike some of the other players in this tale, I was able to avoid acting out of fear. (Like Salman Rushdie, however, I irrationally closed all the blinds in my apartment –although I lived at the top of the tallest building in my neighborhood — and locked all my doors after I got my first threats.) Why? Because, I think, I wrote THE JEWEL OF MEDINA  out of love — for Aisha, one of the great heroines in history, and for humanity, which could stand a little understanding about people not like us.

Perfect love casts out fear. Who knows this better than the people of Libya who, soon after the attacks on the Benghazi consulate, took to the streets to demand an end to the armed militias terrorizing them? Love for their country, and for freedom, has led them to take positive action against hatred and to conquer their fear of thugs with guns.

Like me, perhaps, those demonstrators decided that, instead of worrying about how or when they’ll die, they’d rather focus on how they want to live. Fear can be a crippling emotion, but love provides a powerful antidote. 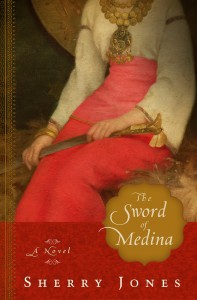 This is one of several posts by author Sherry Jones commemorating the 4th anniversary of THE JEWEL OF MEDINA’s publication. To win a chance at one of 10 signed copies of the book, click here.